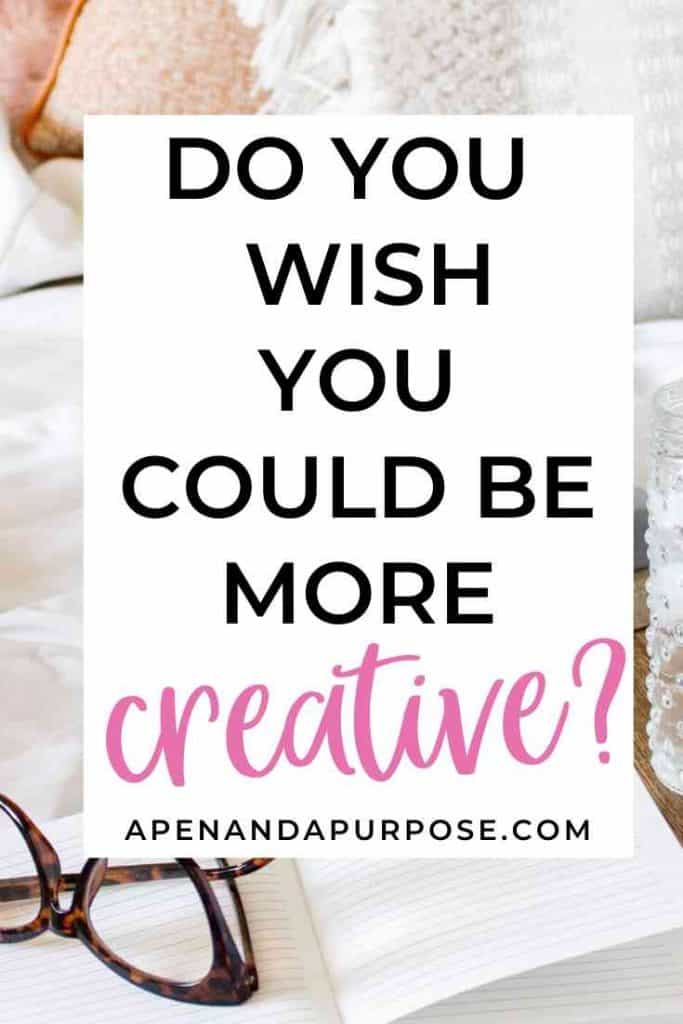 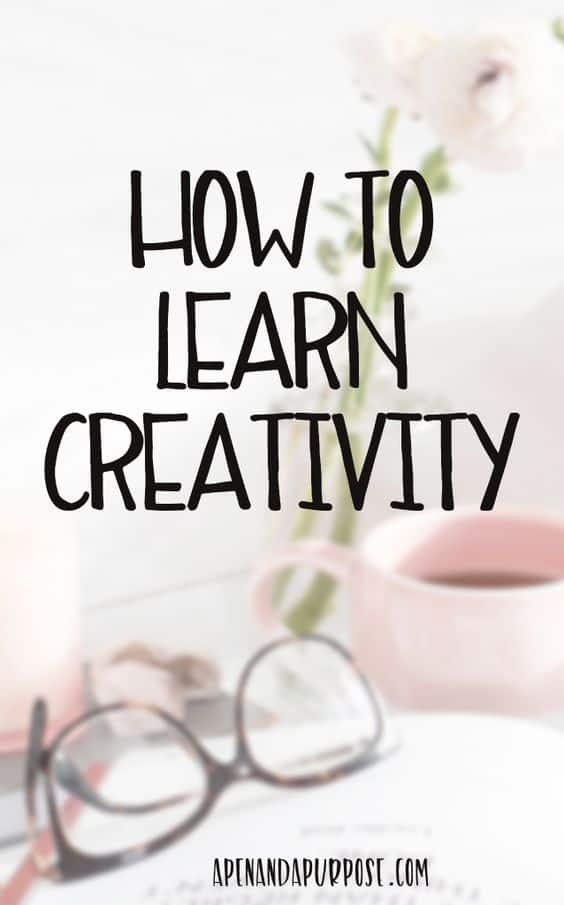 Is it true that people need to be born creative to create? Can you actually teach yourself how to be more creative?

Your Thoughts Cause Creative Blocks

Think of the last time you said  “I’m not creative.”

What do you remember about this?  What was going on around you?  What were you thinking about doing?

My guess is you were thinking of trying something new and talked yourself out of it by saying “I’m not creative.”

I see this all the time on Facebook groups dedicated to bullet journaling.  People are scared to start using a bullet journal because they are afraid they won’t be able to make it pretty.

In business, people are freaked out about starting and putting themselves out there because of fear of judgements.  What will people think?

In both cases, these people don’t move forward.  They experience fear of the blank page…or the dreaded blank page computer curser.

Does this mean they’re not creative?  Or does it mean something else?

Whenever you’re trying to build something out of nothing, such as when creating your own business, writing a book, diying a craft, coming up with ideas, whatever it might be…

It’s easy to stop yourself and to talk yourself out of even trying by telling yourself you’re not creative.

What Does Creativity Mean To You?

Let’s be smarty-pants for a moment and look at the definition of creativity.

The definition that comes up on Google for creativity is:  “relating to or involving the imagination or original ideas, especially in the production of an artistic work.”

I don’t know about you, but I’m overwhelmed.  While I’m attracted to the imagination part, original ideas and artistic work feel a little bit intimidating.  They make me want to say “I’m not creative.”

What the heck does “relating to original ideas” mean?  Does this mean that you have to come up with something completely new and innovative that no one else has thought of before?

Well, that’s not possible.  There are billions of people out there.  All of those billion people are always thinking of something.   It is unlikely that you’ll think of something completely original.

So, let’s say you think of something new (to you) but someone else already thought of it.  Does this mean you weren’t creative?

Isn’t coming up with the ideas creative even if someone else already did? Couldn’t that mean we were both creative, the other person was just first?

Does Creativity Require You To Be Artistic?

Although art is creativity, not all creativity is art (at least not in the general sense).  Some examples of creativity that wouldn’t necessarily be art:

If you think you have to come up with something completely original or that you have to create art in order to be creative when these are not your natural gifts, what happens?

You tell yourself you’re not creative, that you aren’t good at it.

What happens when you tell yourself you’re not good at something or that you can’t do something?  Frankly, you just don’t do it.

When you say you’re not good at something such as “I’m not creative,” you’ll put a wall up in front of that thing.  You don’t take the time to go do it.

It is a self fulfilling prophecy because then of course then it’s true we’re not good at it because we don’t do it.

You get yourself stuck in a box formed of your limiting beliefs about yourself and the only way out of that box is to act in ways outside of that box!

In other words, the only way to believe you can be creative is to try it out.

Here’s the thing, even if you do start trying to do the thing you fear you’ll suck at, you might quit easily because it’s hard.  Seth Godin said it best on this podcast when he said people feel incompetent while learning something new until they are competent at it.

Isn’t that true?  Do you remember learning to drive?  You had to pay attention!  It was hard.

I almost went in a ditch a few times before I learned that you have to turn the steering wheel back after turning haha.

When you feel incompetent, you don’t want to try.  Feeling incompetent feels ICKY and reinforces your belief that you aren’t good at something.

Well, because you actually aren’t good at it until you’re good at it.

Have you ever started something but then gave up as soon as you started questioning your ability?

Do you think you gave yourself enough of a chance to learn and improve, or did you give up too soon?

A Different Way of Thinking About Creativity

The conventional definition seems to imply either you are or you are not creative.  You either have come up with things no one else has ever come up with or you haven’t.

Instead, creativity comes from practice, from allowing yourself to play around with things, to have ideas without beating yourself up.

Often creativity is taking something else and putting your own spin on it.  Use your unique perspective to change things up a bit.

You’ve seen this before.  People are doing the same things…but somehow they’re different.

There are many things that are created by starting with imitation of what came before.

But you have to be open to believing your perspective matters.   The truth is whatever story you tell yourself is the one you’ll live.  If you believe “I’m not creative,” then you’re right.  Because you won’t be.

But if you change your thinking and look at things a little differently, you might notice that you actually are creative.  You’ve been holding yourself back with the belief that you’re not.

But you just didn’t understand…

Can You Learn Creativity?

What if you decide right now, today…that you are a creative person.  Believe it, own it.

How would your life change?

If you consider that you’re already a creative person, the question changes.

Instead of asking whether you can learn creativity, the real question becomes can you be more creative?

Can you be open to new experiences?

Creativity comes from experiencing things, doing the “work” (or play) of creativity.

When you do new things, it opens your mind up to think about things differently.  Be open to new experiences.

Consider times you may have been creative without knowing that you were experiencing creativity!  The following must use the creative process:

If you can do that stuff, I think you can also explore more creative pursuits.

It’s about putting yourself out there and trying…

Letting yourself experience different ideas, playing around with adding your own perspective to those ideas and going for it.

So tell me, in what ways have you surprised yourself with creativity?

Challenge Yourself To Boost Your Creativity

It is time for you to stop saying “I’m not creative” and do a little creative booster challenge.

Notice how your thinking impacts you and keeps you stuck in a box and challenge that thinking.

Instead of saying “I’m not creative”  think of yourself  as a “creative sprout.”  When you find yourself saying “I can’t,” commit to stopping yourself and doing it anyway.  I created a cheat sheet to help you to challenge limiting beliefs.  You can sign up to receive it below

Want To Challenge Your Limiting Beliefs?

When you have thoughts of not being good enough, pause and allow yourself to be a learner rather than a perfectionist.

You can grow in your creativity, it just takes a change in perspective to allow yourself to change.

Allow it to be fun, play around with ideas.

4 thoughts on “Can You Learn Creativity?”

4 thoughts on “Can You Learn Creativity?”