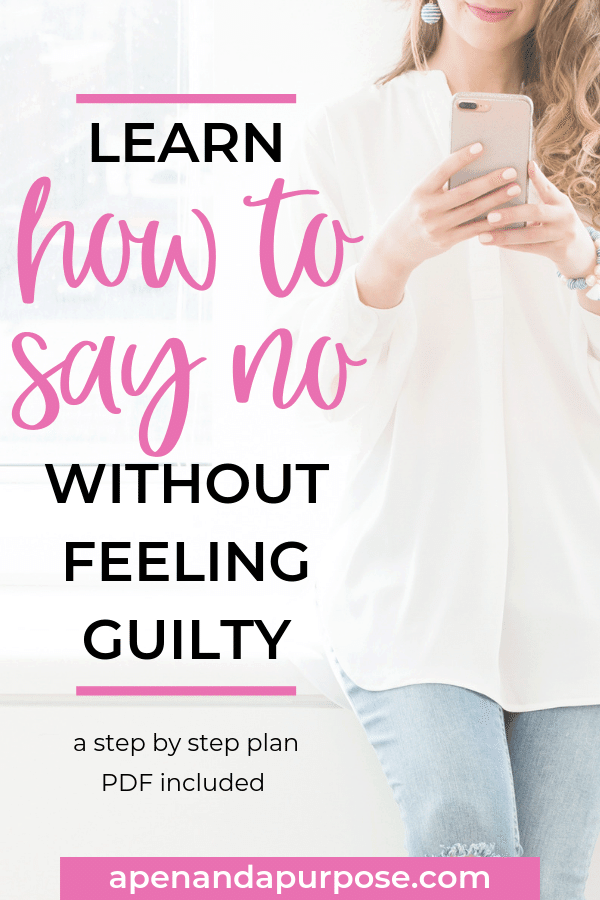 If you’re like many of my clients and students, you struggle with telling people no.  This seriously interferes with you reaching your own goals. Worse, it ultimately harms your relationship with yourself and others. Learn how to say no and the slight mindset shifts you need to make to do so.

Get a free download of the formula for how to say no and start using it today
Yes Please!

Why is it So Difficult To Say No To People?

When I’ve found it hard to say no to people it is usually because:

If you look closely at that list, you see there is a common theme of fear.  This fear comes directly from my thoughts rather than from reality.

Think about it a minute.  How many times have you had someone say no to you?  Did you hold grudges, think poorly of that person, and then never ask them again?

(Of course it depends on how that person answered.  If they actually were rude, you may hold a grudge, am I right?)

The thing is, you might think that you must take every opportunity that comes your way to get ahead, but that just isn’t true.  You’ve heard about the myth of multitasking right?

When you take on too many things you do all of them terribly so saying yes might actually backfire!

But being helpful, signing up for things, and going out to be social all feel like a great way to help you belong, to get acceptance from others.

Learning To Say No Helps You Avoid Problems

Recently a few people retired and/or left their positions at my job.  Since I’m in charge, I’ve had to take on all of their duties as well as my own.  It is an unmanageable workload.

One of the things I like most about my job is being able to help people.  I usually field calls and assist people throughout the day since that brings me joy.

At first, I tried to take on all the things I am used to taking on.

People asked for my help and instead of being able to help I told them I would get back to them.  My to do list grew to be several pages long and I have not been able to get back to everyone.

My saying ‘yes’ to things while also knowing there is no way I can get to things has made things untenable.  I have a commitment to get back to people, and yet…

Trying to take care of their needs as well as get stuff done that I need to get done means that nothing is getting done well.

It feels like a hot mess, like there are balls all up in the air flying around my head and I don’t even know what the balls are let alone how to catch them!

I’m sure there are many balls falling to the ground that I don’t even know have fallen.

The person asking for my help is depending on me, and I’ve flaked.

In this case, saying yes to something “to be helpful” or “so that I don’t disappoint someone” has backfired.  Saying no would have helped both of us because she could have asked someone else for help instead of waiting on me and I would have finished the things I needed to do so I can be more helpful to her in the future.

Have you ever had an experience where you have taken on more than you can handle because you had a hard time saying no?

How about a time when you knew you should say no but it was too hard to do at the moment so you gave a non-answer like “maybe.”   Or maybe you just choose not to answer, ignoring them and hoping they will go away.

That’s the worst!  Now the person is hanging out waiting for you but they aren’t sure if they can count on you.  You may back out at the last minute or you may cancel. They have no clue.

Have you ever known you should say no but you beat around the bush and it became too late so then you go do the thing and you are unhappy the entire time!

What if you were to just say no in the first place?

Saying Yes Means Saying No To You

When you say yes to one thing, you’re saying no to other things.

You only have a limited amount of time and mind space to focus with.  When you agree to go to a party you are losing the opportunity to work on your goals or spend time with you family.

But saying no feels selfish, right?

You should want to help people, right?

You should want to go out and be social, right?

What happens when you constantly put others’ demands above your own?  You feel resentful and also disappointed in yourself.

Resentment leads to relationship problems.  Not standing up for yourself leads to less trust in yourself.

When you learn to say no in a respectful way, it builds relationships with yourself and others.  People know what to expect from you and often actually respect your ability to set boundaries.

So it’s clear you need to get better at saying no.  You’re not alone. So many people have difficulty with this.  Let’s start with errors in thinking you have about saying no.

How To Say No Without Feeling Rude or Mean

First of all, there are some important mindset shifts you need to make:

So how do you say no to someone?  Whether that person is a friend, a family member, or someone from work, you can be assertive and decline in the following ways:

How To Say No Simply

My favorite structure for saying no comes from the work of Marsha Linehan and she teaches the acronym DEAR MAN (which is a little weird but bear with me):

Describe:  First describe the situation. Example:  I know you are moving next Tuesday and need some help with carrying heavy furniture.

Express:  Next express your opinion/thoughts/feelings about it.  Example: I am actually not available on Tuesday because of a prior commitment.

Assert:  Don’t beat around the bush, just come out and say it.  Example: So I am unable to help.

Reinforce:  This is where you say something to reinforce them for going along with your answer.  Example: I appreciate you thinking of me and for understanding that I cannot help.

Mindful:  This is really about staying mindful and focused on your goal.  Don’t give in to distractions (or your feelings). Stick with the plan.  Repeat yourself if necessary.

Appear Confident:  Even though it may be really hard to say no, doing so while appearing confident will help.  Stand up straight, give eye contact, speak in an even tone…all of those things can help. If you look down and seem insecure, it’ll seem pretty easy to get you to change your mind!

Negotiate:  Be willing to negotiate if you feel it’s necessary.  If there’s something else you can offer, this is where you would do this.  Example: I’m not able to help; however, I know the name of a great moving company!

You can see the importance of learning to set good boundaries with people so that you can choose to say no to the things that interfere with your ability to reach your goals.

Instead of allowing yourself to believe that saying no will ruin a relationship or cause you to miss out on things, you see that saying yes can cause more problems!

Learning the important skill of saying no is something you should start practicing right now.

I love Linehan’s technique because it’s a step by step formula that helps you to remember the important aspects of how to say no to someone in a way that’s effective.

I created a printable PDF for you so you can download the DEARMAN skill to practice later.  Enter your name and email and I’ll send it over to you:

I’d love to hear in the comments about how you have dealt with a similar situation where you’ve struggled with how to say no to someone.  What did you do and how did it turn out?